The Sierra de Famatina is surrounded by semi-arid and subtropical mountain regions. However, its height generates convective rainfall. Combined with the decrease in temperature with altitude, this leads to a more positive water balance, and consequently a progressively more mesophilic vegetation towards medium elevations. At higher altitudes the low temperatures and periglacial/glacial conditions prevent the development of vegetation. Rainfall is concentrated in thermal summer (December-March), although occasional polar fronts can generate significant snowfall in winter. Strong westerly winds are a frequent feature on the higher peaks, particularly in winter.

Human intervention in the Sierra has historically been intense. Even today, the impact of mining operations and exploration from different periods are evident in the area. La Mejicana Mine and the cableway are currently historical monuments and tourist attractions. Mining explorations continued in the area until the end of the 1990s. Hence, there are still remains of building installations, tailing ponds, roads and open tracks from these explorations. Today, tourism is one of the main human activities in the Sierra.

The installation of the Sierra de Famatina site began in 2011, with the establishment of permanent plots in the first four peaks and ended in 2016, with the installation of a fifth monitoring summit in the highest peak at the site, called Roca Glacier (GRD). The summits of the site are within the subalpine (GEM and MDO), alpine (ERI), subnival (ARC) and nival (GDR) ecological units.

The Sierra de Famatina site is located in the west central province of La Rioja, western Argentina, in the foothills of the Sierras Pampa (Figure 1). The site is approximately -28.855 LS and -67.687 LW. This places it within the so called Arid Diagonal that stretches from the Atacama Desert, through the Puna and Monte, to Patagonia. 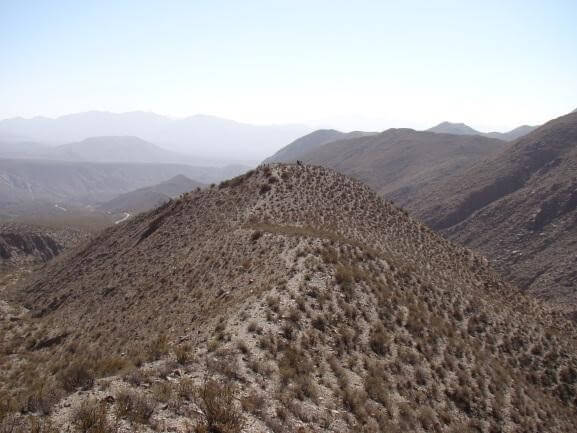